2:40 PM
Escape The Curse of the Temple is a violently face-paced game that involves nearly destroying everything in your immediate vicinity. The game revolves around lightning-paced, multiple dice rolls to get your character deeper into unexplored temple rooms, collect gems, and then frantically make it back in time to your starting point. It is 100% cooperative between teammates meaning if you do not actively work together and communicate, you will quickly perish.

We found it took about 5 minutes to learn the rules with individual rounds taking around 10 minutes maximum. The highlights of the game include its fast pace and cooperative nature. While you listen to a special soundtrack in the background sourced from the internet and played on a smartphone, players need to roll certain symbol combinations with their dice to create and then explore new rooms in an ever-expanding temple. You win by getting all of the players out of the temple exit within the timeframe while simultaneously finding a certain number of gems along the way. The only catch is that the temple exit has to be found through the creation of new temple rooms, which are essentially the playing tiles.

This means that the playing board is always getting bigger while many players roll multiple dice at once. So you need a large, sturdy table in a room where the playing dice are unlikely to be lost.  With that said, a good beer to pair with this game would ideally be one that can fall on the floor or spill on the table with minimal collateral damage, i.e. a blonde beer from a can drunk straight from the can. Moreover, you will have no time to savor or contemplate your beer while playing this game. Naturally, we did the exact opposite.


Our group sampled one of J Wakefield Brewing’s high-gravity, dark, sweet, dessert beers poured into glass snifters: Bourbon Barrel Zmeis Baltic Porter. (We received this beer from Wakefield's O.G. Society awhile back.) Baltic Porter, to me at least, is a hard to find style that usually gets me excited as they tend to be savory, rich, and with a clean mouthfeel. Baltic Porter is, in my mind, supposed to be the lager equivalent of Imperial Stout. Zmeis, unfortunately, was none of those things. This beer was much closer to American Strong Ale as the bourbon character was forefront in the aroma, but the flavor was much too sweet. Milk chocolate and bourbon were the main flavors opposed to dark chocolate and savory heavy roast found in world-class Baltic Porters such as the seasonal from Duck-Rabbit in North Carolina.

We switched over to To Øl’s Sur Citra, which was a big hit. This beer was much more conducive to quick sips in between fast rounds. Sharp yuzu fruit was the main aroma and flavor with a refreshing, effervescent mouthfeel. It was delicious, but you could drink it quickly and not need to dissect or savor it. A good beer to pair with this game in retrospect would be something like Avery’s El Gose or Founders All Day IPA in cans. Just keep the beer in the can and skip the glassware.

Our only complaint about this game is that the countdown soundtrack sourced online isn't very clear. You are meant to stop exploring and head back to the temple's starting point once you hear drums, but the whole music sounded like drums at least to me. Better defined music or just a voice similar to Olmec from Nickelodeon's Legends of the Forbidden Temple would be an improvement while maintaining the game's primal, jungle ambiance. 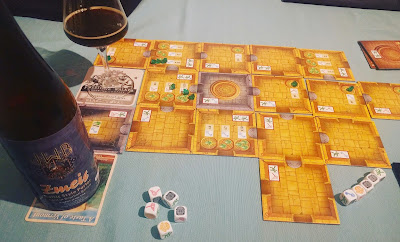 Have you ever hosted your own Murder Mystery Party ? It is easier than it sounds! Just buy the kit online (in this case A Murder on the Grill ), and it comes with everything you need...invitations, character overviews, costume recommendations, scripts for each character to read, and a CD that will be the host for the night. I highly recommend checking it out for a night of fun with your friends (and it's a perfect replacement to game night).  In this scenario, the body of Tom Dooley was discovered at an outdoor barbeque, and you must solve the murder before the killer strikes again! This had a nice twist at the end, which one person figured out and properly solved the case!  As for the beer, we tasted a nice range of brews with a specific focus on Modern Times , including their Orderville IPA (yum), Protocosmos (yummy), and Fruitlands (yum-a-licious). Not to mention some great guest appearances from The Bruery, Paradox, and Toolbox Brewing...all sours of course. Finally, we had on
Read more