11:00 AM
The Resistance is my #1 favorite party game ever.  It is a hidden role and social deduction game for 5-10 players that was inspired by Mafia/Werewolf where most players are on the good team and trying to find out who amongst them are the evil spies. The game itself only lasts about 30 minutes, and it doesn't have player elimination like those other games!

At the beginning of the game everyone is assigned a role card with the minority of players being spies (eg two spies in a five player game), and then everyone closes their eyes.  The spies then open their eyes, so only they know who each other are, and then everyone opens their eyes.  The game from there consists of three to five rounds where the group rotates a leader who decides who amongst them is going on a mission.  Be careful when choosing your team, since if you choose a spy a go on a mission, they can anonymously fail it, and the spies win that round.  Then a new leader is in charge of putting together the next team to go on a mission, now with the information that one person on the last team is a spy. Therefore, the entire game is focused on trying to figure out who the spies are and not allow them to go on any missions.  The first team (good guys or spies) to win three rounds wins the entire game.

This game is way more intense than it sounds, and in my opinion, it's the most intense/stressful game out there. You really have to play it to get the full experience.  Now, it may not be for everyone, so it really depends on the personality of your group. If you have people in your group who love to get into character and can look others in the eyes and lie, you're going to have a lot of fun with this. However, if you have a conservative group that doesn't like to lie, I'm not sure you'll enjoy this.

Either way, you have to try this game once, as it's the best party game I've ever played.

There is a lot of deduction in this game, and I'm pretty sure someone has published a white paper discussing all the different statistical outcomes and probabilities that you can apply when playing this game. For example, if a group of three goes on two missions in a row, succeeding the first and failing the second, why would that happen? Why didn't the spy fail the first mission? Is it possible there are two spies in that group, and due to the inability to communicate they both played Success on the first mission (thinking the other was going to fail it and not wanting two Fail cards to be shown to the group)? This game can make your head hurt trying to figure everything out. That's why for some, it's better to pair it with coffee instead of beer, specifically Modern Times Coffee. 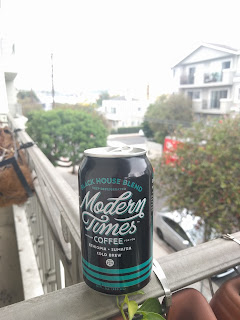 For those that don't know, Modern Times of San Diego is my favorite brewery, and they may be the only brewery in the world that roasts their own coffee beans.  In fact, they are as obsessed with coffee as they are beer.  Therefore, besides just having amazing stouts, they also distribute some of the best coffee I've ever had.  Shown above is their recent cold brew that they started canning, and below is a photo of their Black House coffee beans they source and distribute. Can you imagine going into a brewery that has several blends of excellent cold brew on tap in addition to amazing beer? Sounds like Heaven to me, but others just call it San Diego... 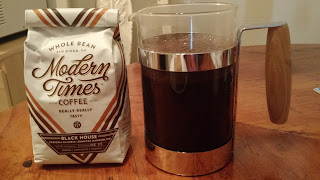