Warning: Do Not Play This Game At Home 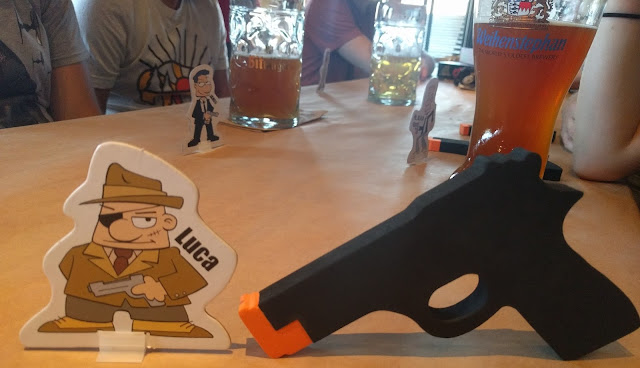 Ca$h 'n Guns is a fun 4-8 player party game where you and your friends are a gang of mobsters in an abandoned warehouse, and you can't agree how to split the loot!  It's time to let the guns talk and soon everyone is aiming at everyone.  The goal is to have more money than anyone else after eight rounds while still being alive.

Each round, one player is the Boss and controls the pace of play. First, loot cards are revealed on the table to show what's up for grabs. Next, players load their guns by secretly selecting either a real or fake bullet from their hand. The Boss counts to three, and each player points his foam gun at someone else.  After observing whose aiming at you, the Boss counts to three again and anyone who doesn't want to risk getting shot can back out and remove themselves from the round. Everyone who's pointing a gun at someone still in the round now reveals their card, and anyone who's the target of a real bullet takes a wound marker and gets none of the loot.  Everyone still left in the round takes turns dividing the loot.  After that, a new round starts, and whoever is still alive and has the most loot after eight rounds wins!

The game itself is a fun party game. The only downside is the life-size black foam guns that come with the game.  Warning: Be careful if you buy this game, and don't take these guns outside in today's environment.  They did add orange tips to try to make them less realistic; however, I wish they were bright red or something more unrealistic. You can easily play this game with your hands and get the same effect.

What do mobsters drink? Apparently BraufactuM Progusta in German Steins or Boots! BraufactuM Progusta is a German IPA (can you believe it, the Germans make IPAs like the Americans?), and it's surprisingly decent.  Currently at 6.8% ABV, it has a 68/100 on RateBeer, and is a good option if you're at a German biergarten and have to choose between that or a lager.  However, it can't compete with the epic IPAs of Firestone, Modern Times, Mumford, or even Three Weavers.  Until next time, my friends!