4:02 PM
Carcassonne is an old-school game that came out back in 2000.  It was the Spiel des Jahres winner (Game of the Year Award) back in 2001, only 15 years before Code Names won in 2016.   Carcassonne is a simple tile-placement game in which the players draw and place a tile with a piece of southern French landscape on it. The tile might feature a city, road, abbey, grassland, or combination.  The tile must be placed adjacent to tiles that have already been played so that cities are connected to cities, roads to roads, etc. Having placed a tile, that player can then decide to place one of his meeples on one of the areas on it, which can score points for the owner of it when the structure is completed.

The game itself is easy to learn and play, which makes it great for families or as a gateway game for new gamers.  One of the highest scoring tiles in the game is an abbey, which is worth 9 points if you successfully complete it.  Speaking of abbeys, we paid tribute to those while drinking The Lost Abbey's Track #10 while playing the game.

The Lost Abbey brewery is an epic brewery in San Marcos, CA (San Diego FTW) that produces epic Belgian-inspired and premium beers, including some of the best stouts and sours in the world.  The one pictured below is Track #10, which is 12% ABV Imperial Stout that has a 100/100 on RateBeer.  The beer itself is a mind blowing combination of chocolate, coffee, and bourbon flavors that rival any stout I've ever tried.  On your next trip to San Diego, which is a must-visit if you like beer, definitely stop here on your way to Modern Times. 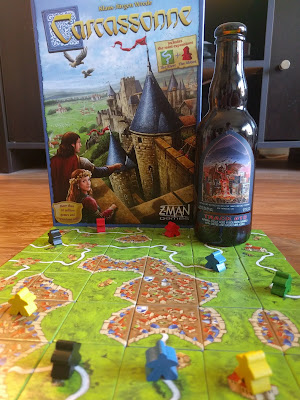