12:01 AM
2016 Game of the Year Winner Code Names just released a new version called Code Names: Pictures where you play with pictures instead of words.  You can read my review of the standard Code Names here. Code Names Pictures isn't even available to the public yet, but I was able to play it via a friend who picked up a copy at Gen Con, which is the largest board game convention in the United States and just took place in August.

Code Names Pictures has all the same rules as standard Code Names except you're playing with slightly fewer cards that are all pictures.  Now, the pictures themselves are slightly fantastical looking and reminded me a little bit of Dixit Cards (nowhere near the level uniqueness of Dixit); however, each card tends to have multiple images on it, such as a baby and a flower in the same image so the clue should be referencing either of them.

My opinion: If you like Code Names, you'll like this game since it's practically the same. The major difference though is that it is much easier than standard Code Names.  For example, the clue giver in my group gave clues like "Square 2" and "Circle 2" to describe the shape of the images.  This is too literal and lacks the complexity of standard Code Names with words when your clues need to be much more creative and strategic. Also, in standard Code Names, words can have multiple meanings, so the word "carrot" could be referring to a vegetable or a diamond.  However, in this game, when there is a drawing of a carrot on the board, you know any clue would only reference the vegetable.  Overall, this version is better for new players due to simplicity; however, more experienced players will prefer the standard word version as it is more difficult. I don't plan on buying a copy of this and am happy with the standard version.

Hydration: If you cannot tell from the stein in the photo, I was at a German Biergarten when playing this game, so I ordered the Maisel & Friends, which is a German pale ale brewed by Brauerei Gebr Maisel Bayreuth in Bavaria, Germany.  Although the beer only has a 68/100 on RateBeer, it was one of the better beers at this bar, and I much prefer pale ales to light German lagers any day.  Hopefully I'll be showing off a better beer in the next post! 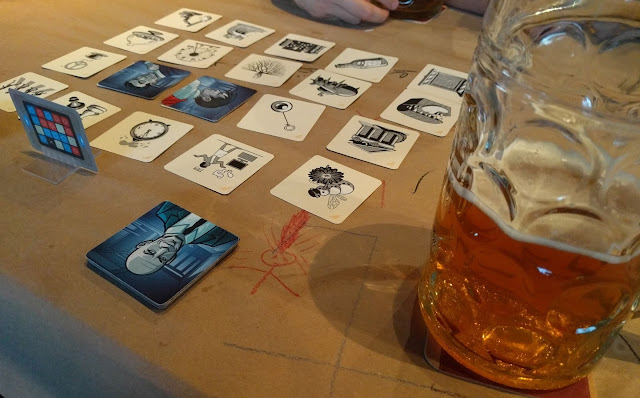