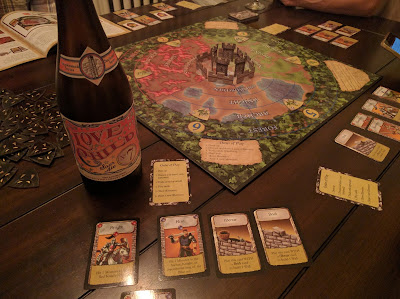 Castle Panic is a cooperative game for up to six players where everyone must work together to defend a castle from monsters that attack from the forest at the edges of the board. Players can trade cards, attack monsters, and work together to fend off the ugly beasts. Players either win or lose together, although there is a variant where the person who slays the most monsters is declared the Master Slayer.  In that variant, the players would then need to balance the survival of the group with their own desire to win. We played the standard way since winning as a group is fulfilling enough. If you enjoy cooperative games like Pandemic, definitely check this one out!

Boulevard Brewing Company is a solid brewery from Kansas City, Missouri. With the plethora of West Coast Beers, I don't get to taste too much of the MidWest on a usual basis, but this beer was excellent. Love Child #7 is the seventh in their series of sour beers, where each subsequent batch they increase the amount of Flander's style red. Therefore, the strength of the beer has been steadily declining from 12.5% ABV in their #1 version to 8.2% in this one. If you're a beer nerd, you might appreciate learning that this sour ale was made up of multiple blends aged in red wine barrels, whiskey barrels, and stainless tanks. If you're not a beer nerd, I'm sorry. Just buy Castle Panic, a six-pack of Sculpin, and call it a day.