12:30 AM
Machi Koro is a popular family drafting game where you are the mayor of the city Machi Koro, and you must grow the city into the largest in the region! The citizens are demanding jobs, theme parks, cheese cake factories, pizza joints, and more! On your turn, you role a die, collect income, then purchase new property. As the game progresses, you start earning more income on each die roll since you have more properties (somewhat similar to Monopoly but way more fun). The first player to construct all of their landmarks wins!  The original game is only 2-4 players, but the expansion allows you to play with a much larger group. Highly recommended if you're looking for a family-weight drafting game. However, if you're playing with your family, you may not want to drink as much beer as we did while playing. 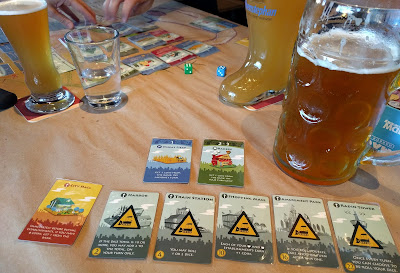 Wurstküche is an epic restaurant that has locations in both downtown Los Angeles, as well as Venice.  The place is known for exotic sausages (everything from pork to rattlesnake to alligator), the best french fries in the area, and a surplus of German & Belgian beers.  You can order your beers in boots or steins (see photos above and below). With a surplus of long tables, this place makes for an excellent venue for board games. Definitely check it out if you're ever in LA! 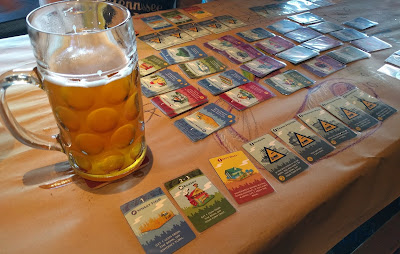