1:39 PM
AssassinCon is a fun hidden movement game where each player takes on the role of a secret assassin at an annual convention where the deadliest folks get together every year to prove who is the best in the world.  The goal of the game is to catch your target while evading the person chasing you. Points are scored for correctly assassinating your target or identifying who is pursuing you. The nice thing about this game is that there is no player elimination, so even if you die, you're still in the game! For only $20 online, I recommend it!

The game was well hidden amongst epic beers at our game night (see image below). Our choice for the evening were sour beers from Cascade Brewing, which is based out of Portland. When you visit the brewery in person, they give you a menu where the front says Non-Sours and the back says Sours. I love how the default beers at this brewery are sour beers, so the section of normal beers is specifically called Non-Sours (vs the other way around normally). Also when you go to this brewery, you can sample sour beers with almost every combination of fruit...strawberries, blueberries, cherries, etc. Highly recommended if you are ever in Portland or can get your hands on a bottle!

Until next time, my friends, keeping playing games and drinking beer! 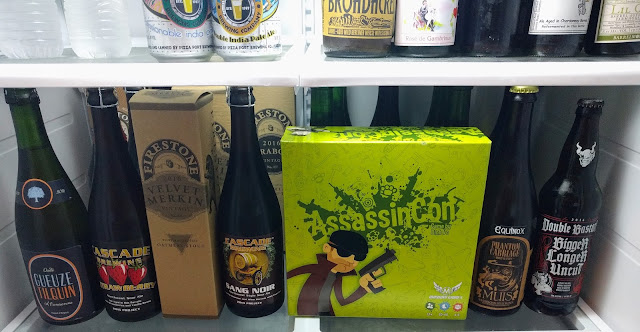