11:09 PM
Let's cut to the chase, Cosmic Encounter is Tom Vasel's #1 game of ALL TIME by FAR. If you don't know who Tom Vasel is, he is the authority in the board gaming industry. He is the creator of The Dice Tower, which is the largest board game reviewing network on YouTube that also has a popular podcast. He even hosts his own gaming convention (Dice Tower Con) and recently hosted a cruise boat for board gamers! Therefore, for someone who has played literally thousands of games (not me, Tom), Cosmic Encounter being his #1 overall is saying something.

In Cosmic Encounter, each player is the leader of an alien race.  The object of the game is to establish colonies in other players' planetary systems. The game involves heavy negotiation between players, strategy, and fun! Each alien race has its own special power to add to the mix. I just played this for the first time tonight, and I already see where the hype comes from.  It definitely shines in a group of four to five.

As for the beer, only one beer can match the epic level of Cosmic Encounter, and that is Oskar Blue's Death by Coconut. If you've never had Death by Coconut before, wow. It is one of the most flavorful stouts that blends chocolate, coffee, coconut, and cream.  Definitely a rich, dessert beer, and something I think even non-beer drinkers will like. Be sure to buy it if you ever see it at a bottle shop! 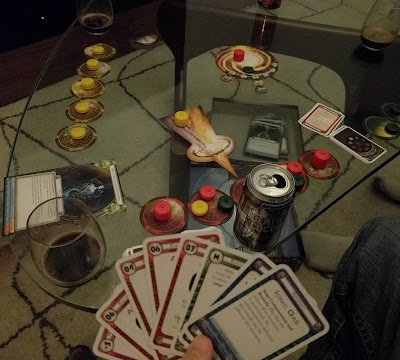